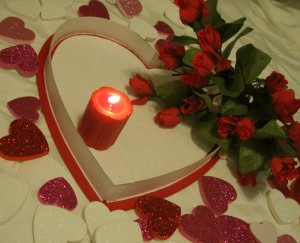 Friday 11th November it’s my wedding anniversary (I got married 11-11-2011). Last year it was the first anniversary after Jan, my husband, crossed over to heaven. I asked him how I could best remember and celebrate our love and he advised a ‘light a candle’ action. This candle symbolises our pure, unconditional love. I gave our love the intention to spread through this candle all over the world to everyone who needed this love, because they missed a dear loved one too.

For Jan and me it would be a huge present if you too will light a candle on the 11th November and give it the same intention. Last year it was a success and we felt honoured that so many people joined our action. I announced to make this a yearly recurring event. Feel free to share this message and to join us. Let’s try to create a chain of lighted candles in the world to spread love. If you’ll join, I would appreciate it if you’ll send me a message below (like ‘I’m joining’), just to see how far this idea of Jan can reach.

Thank you so much for participating!

This form is removed till the next 11th November because of spam reasons.

Why forgiveness is so important to heal

Recently I had a client who still suffered from a traumatic experience of years ago. After hearing the story, the cause of her physical issues was that my client felt so much resentment, hurt and pain toward a relative involved in this trauma, that she had abandoned her from her life, but was still ‘fighting’ with her in her mind, mostly to try to understand why this situation had happened. There was a huge judgment about the behaviour of the relative. But with the ‘fighting’ in her mind, she kept her relative and herself imprisoned.

I explained to her that if she wouldn’t forgive her relative, she could not move on and live the life she wanted to. The unforgiveness was blocking her life completely and for such a long time. My client told me she couldn’t forgive her relative for what she had done. I told her that forgiving someone doesn’t mean you approve their behaviour and actions, but that you forgive the person, or the soul as you wish. I asked if she was willing to forgive. Yes, she was, because she saw that the unforgiveness was causing physical problems in her life now.

We asked Archangel Michael to join us and to cut the cords between my client and her relative and to take the energy connected to this whole situation (resentment, anger, hurt and distrust) with him for transformation in love & light. She could feel a heavy weight being released.

Then we came to the point to feel if she could forgive herself. She had never thought about forgiving herself. I asked her to feel what she experienced when she said: “I forgive myself for everything till now”. She had to repeat it a few times but could sense that this felt good and she would repeat this more often after the session at home too, to come to complete forgiveness of herself.

If you have difficulties to forgive someone for what has happened, look at the inner child in them, or the light that is in everyone, and start forgiving that part and then expand it to the complete person. You will free yourself and the other person so that you both can move forward on your paths again.